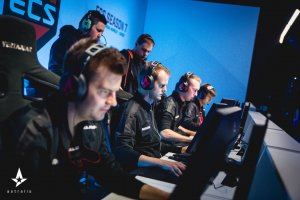 Astralis recently lost the title of the number one team in the world. Will they be able to take it back in France? Photo by @astralisgg

Is another title for Astralis on the horizon?

Can the world’s new number one team claim another title in June?

ESL Pro League Season 9 Finals starts June 18th in France, and will see 16 teams competing for the first place prize of $250,000. Astralis are the odds-on favorite to come out on top in Montpellier, but should they still be considered a lock to win any tournament they enter, or have they finally proven to be mortal?

For the past year and some change Astralis, have without a doubt been the best team in Counterstrike, winning a slew of tournaments and raking in some serious cash along the way. More recently though, they have been taking a bit of a break attending less tournaments, and in doing so they have shown that they actually can be beaten.

Less tournaments means less practice on LAN, and since they have only attended three events on LAN since that Katowice Major they are looking more and more beatable. They ended up coming out on the losing end at two of the three Blast Pro Series events in Miami and Madrid, which pretty much everyone had already chalked up as another win for the Danes.

Coming off of the two losses, Astralis came into the ECS Season 7 Finals as the odds-on favorite to win, but after dropping their first map of the tournament to the up-and-coming Brazilian squad, Furia, it might be the moment everyone looks back at as the moment the Danes’ reign came to an end. They have shown that they can in fact bleed, and I expect there will be some sharks in the water at the EPL Pro League Finals coming for the Danish side.

It is something that has been very hard to say for a long time now, but maybe Astralis aren’t the ones who you should be looking at to come out on top of ESL Pro League Season 9. There are two other teams that I think realistically have a better shot at winning the title in France given their recent play, and lack of play for Astralis. Those teams are Liquid and FaZe.

After being the bridesmaid for what seemed like forever, Liquid have finally claimed the spot as the number one team in the world on the HLTV rankings.

After being the bridesmaid for what seemed like forever, placing second more times that Ryan Lochte, Liquid have finally claimed the spot as the number one team in the world on the HLTV rankings. They have without a doubt been the second best team for over a year with Astralis seemingly being their kryptonite, so it will be interesting to see if they can overcome the hurdle that is the Danes at the ESL Pro League Finals.

The lack of playing time at officials for Astralis and the confidence boost for Liquid may just be what was needed to propel the North American side to finally conquer their rivals. I still have my reservations about saying Liquid will win any event given their past of crumbling when they reach the final, especially against the Danes, but they may be able to finally get it done this time around.

FaZe, on the other hand, are a team that historically has played pretty well against Astralis, and given that they finally have a proper IGL they may be able to find their first win at a premier event since Epicenter 2018. Neo has seemed to revive FaZe since his arrival and push each of their players to the star capabilities that made Counterstrike fans so excited when this roster was assembled.

Rain seems to have gotten back to his 2017 form, olof is the olof of old, guardian has been brilliant, and the only player that hasn’t quite been playing to their potential may be the biggest superstar they have, NiKo. The Bosnian star is fresh off of relieving the IGL duties, which he assumed midway through the London Major and is taking a little bit to get back in the swing of things without having to call the shots.

I expect that come time for the ESL Pro League Finals, NiKo will have shed all of that extra baggage he’s been carrying and get right back into form as one of the top-3 players in the world. If that is indeed what ends up happening, I think FaZe will be tasting victory on the big stage once again.